There are movements within Evangelical Christianity that are loosening on the classical doctrines of God, namely Divine Simplicity. Rejecting Classical Theism’s doctrines of the immutability and impassibility of God, many operate within an economy that suggests there are aspects of God’s being that are subject to influence by the god-human relationship. While His essence and divine character may be holy and fixed, His relatability to humanity is capable of being swayed. To put it differently, God’s actuality adapts to humanity’s actions, prayers, sins, and cultural changes. He is divine, yet He is also relatable and personal. It is precisely this thinking that provides a foundation for the well-intentioned, but cringe-worthy, Christian catch-phrase, “It’s a relationship, not a religion”.

Aside from the fact that this relationship-centric Christian-ese phrase creates false contrariety – by suggesting one of these things is completely unlike the other – this logic is poor and stands opposed to the historic, Christian faith. Lest we forget, most heresies begin with an underlying error in the understanding of God’s being. The doctrine of God, and how we relate to him, is critical and worthy of regular discussion, contemplation, and prayer. What we know to be true of God will touch and drive every part of our spiritual life. There is no knowledge beyond God and truly, no greater task worth pursuing.

We must know God rightly if we are to know Him at all.

Let me begin by clarifying that not all evangelicals who deny the tenets of Classical Theism or Divine Simplicity are heretics. Personally, I think most are just uninformed and unaware that their framework for understanding how we relate to the divine is substantially skewed. They have unknowingly adopted Theistic Mutualism as their theological framework.

This was me at one point; I didn’t know what I didn’t know.  The assumptions I made about God’s being were not founded in scripture. I was unaware that I had been influenced by decades of misguided theologians and philosophers seeking to make God more personal and less transcendent (much of which, I’ll add, finds its roots all the way back to The Enlightenment).

At a glance, this relational-softening of God might seem attractive, logical, and maybe even biblical. We hear all the time that God is a personal God and we read in scripture evidences of God responding to situations with an appropriate display of compassion, anger, wrath, love, etc. In many cases, He even appears to change His position or plan, after some outside influence. Likewise, a fully transcendent God can be hard to grasp; He is big and abstract. It takes hard work and meditation to discern truth from fiction. It’s much easier to comprehend a God that is like, well, us.  Most of us want genuine interaction, but convince ourselves without a flexible, emotional, and relatable component to God this is impossible. After all, any meaningful human relationship is based on some balance of give-and-take. We pray and petition because we desire other realities in our life. We want God to hear us, change His mind, and honor our requests.

For reference, consider the following verses:

So, what’s so controversial? Well, the problem centers in how we understand the driven force of these responses from God. If it’s only us and prayer, then the economy of influence we have with God is not too dissimilar from that of the gods found within Greek Mythology. We possess the power to draw some alternate desired reality from God. God, though in supply of infinite power and knowledge, is ours to try and manipulate. I use this word objectively, and not in a strictly negative sense, as often our prayers are for something good and just. Yet, like Moses in the verse above, we act because we want to revise God’s position on a matter.

Peradventure, let’s pretend we think God to not be compassionate enough in a certain situation, but after intense prayer, fasting, and reasoning with God, He complies and divinely expresses the desired and proper compassion. Logically, this means the petitioner possesses some unique insight into the situation that God must not have. This person has enlightened God’s understanding and convinced Him that He ought to be more compassionate, given this and that. In this scenario, God is not immutable and certainly not omniscient. Instead, He is adapting and by way of outside influence, becoming a more enlightened version of Himself.

Clearly, this is nonsense. God is eternally perfect in every way. He is the single standard by which we understand all things to be good and true. Yet, this is how many Christians practically carry out their relationship with God.

Consider these words by Reformed theologian Herman Bavinck on the errors of a relationship-driven human-god economy. He writes, “The difference between the creator and the creatures hinges on the contrast between being and becoming” (Reformed Dogmatics, 2:156).

Perhaps you’re beginning to see the problem with Mutual Theism and the “it’s a relationship, not a religion” mentality.We must also not forget that when we misrepresent and misunderstand the God of scripture, we make an idol. Our sinful, finite minds are naturally opposed to the holy and exclusive. It makes us uneasy. So, we will ease our consciences and in sin, make Him more like us. Outside of biblical Christianity, almost every religion presents divinity as attainable. But there is only one God that is truly transcendent, divine, and holy. This is the God of the bible. Unlike other gods, His actions are not removed from His being. Rather, His will, His being, His essence, and His actions are eternally the same within God.

One might counter that God’s actions/responses are not connected to His being or essence. Meaning, He is not becoming something else when He responds with a temporal action.  But, that draws out complications related to how Christians historically understand God’s ontology. Christians understand God to be absolute. He is self-sustaining. All wisdom and knowledge is complete and found in Him. More than that, God is the source of all knowledge. No one can know anything unless God has revealed it to them. To suggest that God can know or become something different (if even only for an instant) that He once was not, undermines what it means to be God. God does not change. He is not subject to mood swings; He is always God with perfect understanding, knowledge, and action in every situation.

Furthermore, we must not attempt to understand God through a lens of attributes or behavior, rather, we must understand these attributes through the lens of God. God is not made up components – like the sum of many parts. He is not some complex mixture of love, wrath, grace, etc. He just is. He cannot become anything else because He has always been. For these reasons, we cannot separate God’s actions from His being. They’re unified; all in one. God just is and will forever be. His actions are always the perfect expressions of His being.

So how we do reconcile these emotionally-fueled responses from God  found with the fact that God is also immutable and impassable? 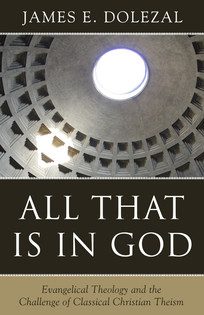 James Dolezal’s book All That is in God is very helpful here. He agrees with Bavinck who contends there is no place for affirming any change in God. The expressions from God we find in scripture are provided and written anthropomorphically. That is, they are written to give God human-like characteristics to help us better understand an aspect of God’s being or Law (the two can be separated). Verses, like those above, are packaged in in such a way that help a finite being understand the behavior of an infinite one.

As an example, has there ever been a point in time when God did not hate sin? No, of course not – yet we find in scripture how God is enraged at sinful behavior. However, He didn’t start the day calm and then become enraged once a sin was committed. No. His character and being have always hated that which is opposed to His righteousness. God is omniscient; He knows everything. He knew sin was going to happen. Nevertheless, scripture communicates God’s anger at sin to us in a way that is anthropomorphic and understandable. In fact, the only aspect of the human-divine “relationship”  that is subject to change is how we apply these eternal truths in our lives.

We must not forget that God created everything, even time. While God is eternal, He engages us with us in the temporal. He met us where we are. Bavinck helps us again when he explains, “He [God] remains eternal and inhabits eternity, but uses time with a view to manifesting His eternal thoughts and perfections” (Reformed Dogmatics, 2:164). It is as Reformed theologian Scott Clark once stated, “The historic Reformed view is that all of God’s revelation is accommodated. That is how it must be in the nature of divine-human relations.” The story of salvation is full of examples of God making Himself known to His people. This was perfectly manifested in the incarnation.

The problematic and prevalent relationship-first model of Christianity fails to paint the correct picture of the economy between God and man. God is God and we are not. We must not project a human relationship model onto the divine; this is precisely why Evangelicals need to abandon the, “It’s a relationship, not a religion” mentality.

That being said, none of what I have said means that we can’t know God and interact with Him. We absolutely can! Jesus has made this possible. But we must pursue a relationship that is honest to His being. Christianity is a religion, and it is the only religion that offers a covenantal relationship with the only true and living God.

In closing, I will again recommend a reading of James Dolezal’s book All That is in God. He deals with this topic in much more detail and effectiveness. It’s not as easy read, but it is rich in doctrine and thought and worthy of your time.